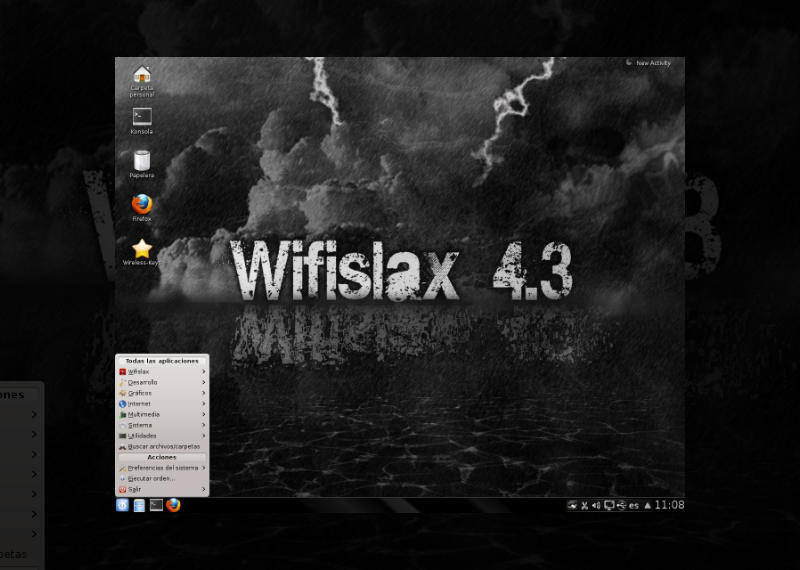 Wifislax is an open source Linux operating system based and inspired by the Slackware Linux distribution. It’s main goal is to support the latest Wi-Fi technologies.

The system provides out-of-the-box support for a wide range of wireless and wired network cards.

In addition, it contains a large number of security and forensics tools, which transforms it into a pentesting (penetration testing) distro.

Distributed as a dual-arch Live CD

It is distributed as a single Live CD ISO image that can run on both 64-bit and 32-bit CPUs.

It integrates various unofficial network drivers, directly into the Linux kernel provided by the Slackware project.

The boot menu is quite different from the ones used in other Linux distributions. For example, it includes two entries for running the live environment with a normal or PAE kernel (useful if you have more than 4GB of RAM), a hardware detection tool, a memory testing tool, and support for qwerty keyboards.

Booting into the KDE environment, with persistent mode enabled to save your session, seams to be the best choice for the new Wifislax user. It provides a familiar user interface, with popular open source applications, such as the Mozilla Firefox web browser, ISO Master, XMMS audio player, and SMPlayer video player.

Start your hacking career with Wifislax

If you’re a novice hacker, we strongly suggest to start your hacking career with the Wifislax Linux operating system. It is uses the reliable and stable functionality of the Slackware OS, many powerful applications and two different desktop environments, all in a single CD-size ISO image.

OKTA: Identity for the internet

We Are Anonymous: Inside the Hacker World of LulzSec, Anonymous, and the Global Cyber Insurgency