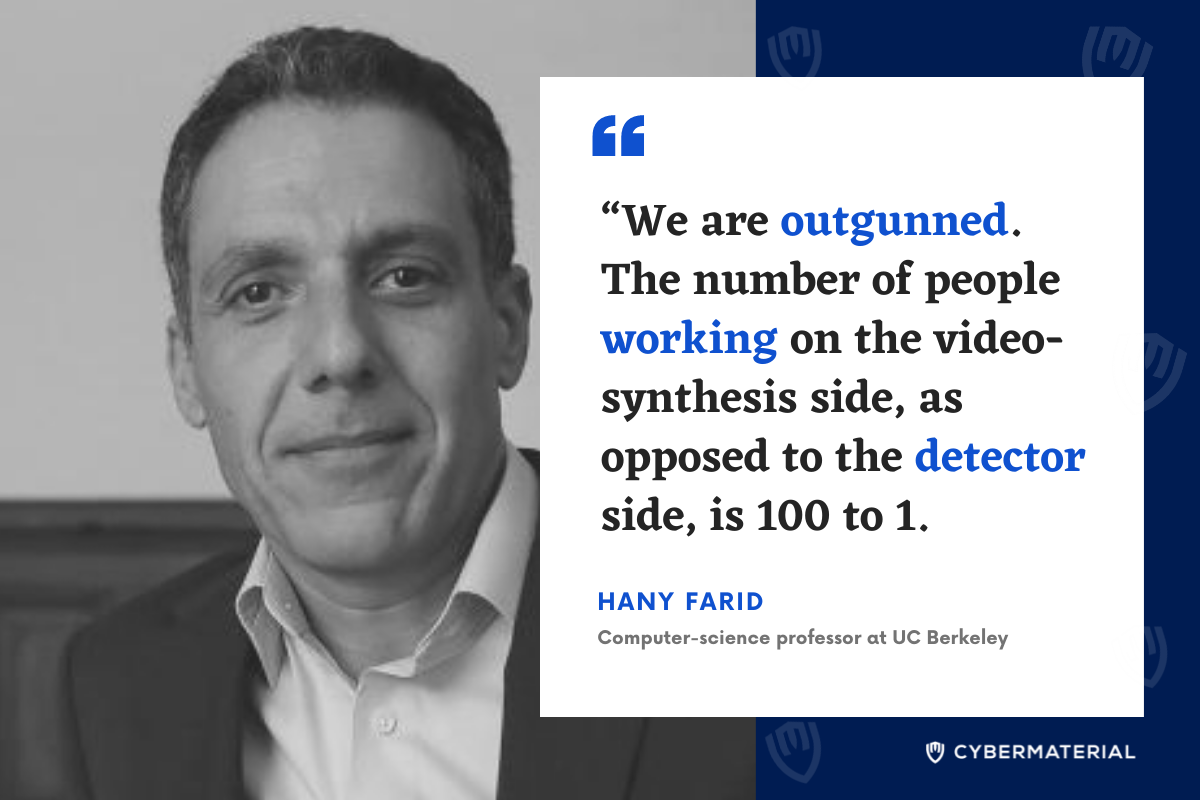 “We are outgunned. The number of people working on the video-synthesis side, as opposed to the detector side, is 100 to 1.” Hany Farid – Computer-science professor at UC Berkeley

Source:  Berkeley Edu – We are outgunned.

Hany Farid is an American university professor who specializes in the analysis of digital images, Dean and Head of School for the UC Berkeley School of Information. In addition to teaching, writing, and conducting research, Farid acts as a consultant for non-profits, government agencies, and news organizations. He is the author of the book Photo Forensics.

Farid specializes in image analysis and human perception. He has been called the “father” of digital image forensics by NOVA scienceNOW. He is the recipient of a 2006 Guggenheim Fellowship and a 2002 Sloan Fellowship for his work in the field. Farid was named a lifetime fellow of the National Academy of Inventors in 2016.

In January 2021, Hany Farid is appointed Associate Dean and Head of School for the School of Information. He remains professor at the University of California, Berkeley with a joint appointment in the Department of Electrical Engineering & Computer Science and the School of Information. He is also a member of the Berkeley Artificial Intelligence Lab, the Center for Innovation in Vision and Optics, and the Vision Science program.

Prior to joining Berkeley, Farid was the Albert Bradley 1915 Third Century Professor of Computer Science at Dartmouth College  and former chair of Dartmouth’s Neukom Institute for Computational Science. Farid was well-known at Dartmouth for teaching the college’s introductory course on programming and computer science. Joseph Helble, dean of the Thayer School of Engineering at Dartmouth, described Farid as a pioneer in the field of digital forensics. Farid joined Dartmouth’s faculty in 1999. He remained at Dartmouth until 2019.

“At the organizational level, deepfakes…”

Deepfakes and the Future of Truth

46.156 modifications of encryptors were detected and discovered 22 new families.