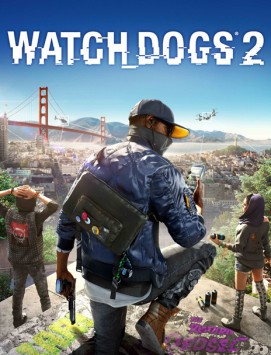 Watch Dogs 2 (stylized as WATCH_DOGS 2) is a 2016 action-adventure game developed by Ubisoft Montreal and published by Ubisoft. It is the sequel to 2014’s Watch Dogs and was released for the PlayStation 4, Xbox One and Microsoft Windows. Set within a fictionalized version of the San Francisco Bay Area, the game is played from a third-person perspective and its open world is navigated on-foot or by vehicle. Players control Marcus Holloway, a hacker who works with the hacking group DedSec to take down the city’s advanced surveillance system known as ctOS. There are multiple ways to complete missions, and each successful assignment increases the follower count of DedSec. Cooperative multiplayer allows for competitive one-on-one combat and connecting with other players to neutralize a player who is causing havoc.

Ubisoft Montreal studied player feedback from the first game to assess what could be improved in Watch Dogs 2 and the setting was researched by making frequent trips to California. Ubisoft Reflections was responsible for overhauling the driving mechanic. Real hackers were consulted to validate scripts and game mechanics for authenticity and references to real-life hacktivism were fictionalized, like the Project Chanology protest. The original soundtrack was composed by Hudson Mohawke. The game was released to overall positive reception from critics which praised the game for improving upon the original Watch Dogs in areas like the hacking, setting, characters and driving. However, character inconsistencies, firearms, and frequent technical issues – later patched – were cited as imperfections. Watch Dogs 2 has sold more than 10 million copies by March 2020. A sequel, Watch Dogs: Legion, is in development. Available for PC, XBOX and PS4.

In 2016, three years after the events of Chicago, San Francisco becomes the first city to install the next generation of ctOS (central Operating System) – a computing network connecting every device together into a single system, developed by technology company Blume. Hacker Marcus Holloway, punished for a crime he did not commit through ctOS 2.0, decides to join hacking group DedSec (composed of hackers Sitara, Wrench, Horatio, and Josh), and conducts an initiation test by hacking a Blume server farm to wipe his profile from the system. DedSec determines that the new ctOS can covertly harm innocent citizens across the city, and thus decide to bring about awareness of their goals through conducting a social media campaign to recruit, by exposing corruption and crimes being conducted through the system, before bringing down Blume.

After a number of successful exposures, Josh discovers a number of irregularities in their follower numbers. When Marcus investigates this, he learns that DedSec has been used by Blume’s CTO Dušan Nemec, in order to sell ctOS 2.0 to those frightened at being hacked. Forced to leave the city for a while, DedSec partake in a hacking event in the desert, and encounter legendary hacker Raymond “T-Bone” Kenney. Interested in assisting them, Raymond joins with DedSec as they work to continue their fight against Blume. After hacking the server farm of a major internet company, the group use the data they acquire to pursue and expose corruption amongst law enforcement officers, politicians, and numerous Silicon Valley corporations, while Marcus also focuses on bringing down several crime gangs, after one group murders Horatio for refusing to co-operate in their crimes. At the same time, Dušan attempts to disrupt DedSec’s operations by combating them with a rival hacking group and the FBI, only for Marcus to counter his efforts.

Eventually, DedSec comes across information about the data manipulation program called “Bellwether”, designed by Raymond, and learn that with both this and a new satellite network, designed to bypass undersea data cables, Dušan plans to manipulate world finances and politics, thus creating a monopoly on the entire world’s electronic data. To expose this and his corruption, DedSec co-ordinate a massive operation to allow Marcus to infiltrate Blume’s San Francisco headquarters, hack their servers, and feed the information of Dušan’s crimes to the police. Dušan is arrested for fraud and Blume is put under investigation, though DedSec resolve to continue their fight against Blume. In an extended ending scene added in a post-release patch, two unidentified individuals note that more DedSec cells and hacktivist groups have been emerging worldwide in response to the San Francisco Blume scandal, and that it is time to put their own plans into motion. The filename of the recording seen in the ending is a set of coordinates located in Brixton, London.

200K Veterans’ Medical Records May Have Been Stolen by Ransomware Gang