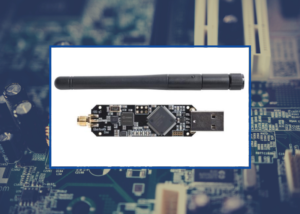 The Ubertooth One is an open source 2.4 GHz wireless development platform suitable for Bluetooth experimentation. Commercial Bluetooth monitoring equipment can easily be priced at over $10,000 , so the Ubertooth was designed to be an affordable alternative platform for monitoring and development of new BT, BLE, similar and wireless technologies.

The Ubertooth One was created by Mike Ossmann at Great Scott Gadgets in 2011 when he realized that there was not an off-the-shelf BT adapter that offered the capabilities he required. A great video from his talk at ShmooCon 2011 tells the whole story and can be found on YouTube. The Ubertooth One is open source hardware designed in KiCad, and all the hardware specs, design files, and additional information can be found at the GitHub Repo

The device is designed primarily as an advanced Bluetooth receiver, offering capabilities beyond that of traditional adapters, which allow for it to be used as a BT signal sniffing and monitoring platform. Although the device hardware will accommodate signal broadcasting, the firmware currently only supports receiving and minimal advertising channel transmission features.

The Ubertooth One is built around the ARM Cortex-M3 microcontroller and is able to capture and demodulate signals in the 2.4GHz ISM band with a narrow bandwidth of only 1MHz. This includes, but is not limited to: Bluetooth Basic Rate packets, BLE packets, and 802.11 FHSS. Some proprietary 2.4 devices may also be possible.

The Ubertooth One follows the standard USB dongle form factor, weighs in at just a few ounces, and measures 3.5 x 1 x 0.3 in.

“Cybercrime is the greatest threat to every company in the world.”