Threat Intelligence and Me: A Book for Children and Analysts 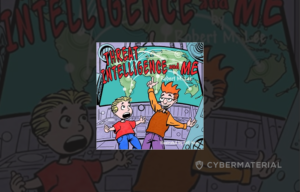 Threat Intelligence Book is a topic that has captivated the cybersecurity industry. Yet, the topic can be complex and quickly skewed. Author Robert M. Lee and illustrator Jeff Haas created this book to take a lighthearted look at the threat intelligence community and explain the concepts in ways that children, as well as analysts, could understand them.

Threat Intelligence and Me is the second work by Robert and Jeff who previously created SCADA and Me: A Book for Children and Management. Their previous work has been read by tens of thousands in the security community and beyond including foreign heads of state. Threat Intelligence and Me promises to reach an even wider audience while remaining easy-to-consume and humorous.

Robert M. Lee is is the CEO and Co-Founder of the industrial cyber security company Dragos, Inc. He is also a member of the Department of Energy’s Electricity Advisory Committee where he serves as the Vice Chair on the Grid Resilience for National Security subcommittee.

A passionate educator, Robert is a Senior Instructor at the SANS Institute and the course author of SANS ICS515 – “Active Defense and Incident Response” and the lead author of SANS FOR578 – “Cyber Threat Intelligence.”

Robert obtained his start in cyber security in the U.S. Air Force where he served as a Cyber Warfare Operations Officer. He has performed defense, intelligence, and attack missions in various government organizations including the establishment of a first-of-its-kind ICS/SCADA cyber threat intelligence and intrusion analysis mission.

Lastly, Robert is author of the book “SCADA and Me”, “Threat Intelligence and Me”, and “Santa and Me” as well as the weekly web-comic Little Bobby which may be found at: http://www.LittleBobbyComic.com. This is all done in partnership with Jeff Haas who draws and illustrates which brings these works to life.

Advanced Persistent Threat Hacking: The Art and Science of Hacking Any Organization

College Shuts Down Due to Cost of Ransomware Attack