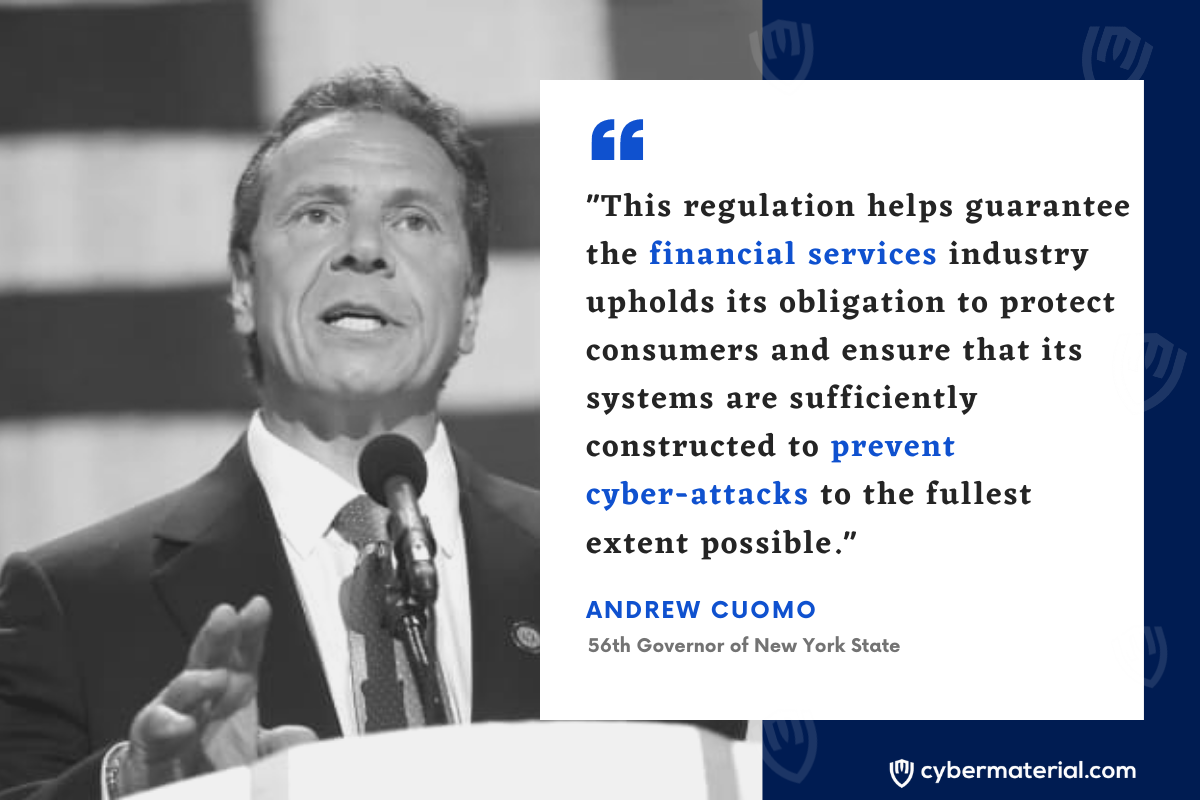 “This regulation helps guarantee the financial services industry upholds its obligation to protect consumers and ensure that its systems are sufficiently constructed to prevent cyber-attacks to the fullest extent possible.“ Andrew Cuomo – 56th Governor of New York State

Andrew Cuomo is the 56th governor of New York, serving since 2011. Prior to his role as governor, Cuomo served as secretary of the U.S. Department of Housing and Urban Development (1997-2001) under President Bill Clinton.

Since taking over the New York governorship, he has become known for focusing on LGBT rights, including marriage equality; women’s rights; and economic stimulus in New York State. On August 10, 2021, Cuomo announced that he will resign as governor of New York.

Cuomo served as his father’s campaign manager during the race to become the 52nd governor of New York. After the elder Cuomo was elected to the first of three terms, in 1982, Andrew managed his father’s Transition Committee and then became a top adviser.
Cuomo began serving as assistant district attorney of Manhattan in 1984, before becoming a partner in the law firm Blutrich, Falcone & Miller. Transitioning back to public service, in 1986 he founded the state’s Housing Enterprise for the Less Privileged (HELP). According to Cuomo’s website, HELP has since become “one of the nation’s largest builders and operators of transitional and low income housing.”
In 1993, Cuomo became an assistant secretary at the U.S. Department of Housing and Urban Development (HUD) under President Bill Clinton. He took over as HUD secretary in 1997, and served in the role until 2001.
Following Spitzer’s resignation, and the struggles of his successor, David Paterson, Cuomo launched a second bid for the state’s governorship in 2010. This time he emerged victorious, handily defeating his Republican opponent, Carl Paladino, to become the 56th governor of New York.

After graduating from Archbishop Molloy High School in 1975, Andrew Cuomo enrolled at Fordham University, graduating with his bachelor’s degree in 1979. He went on to attend Albany Law School, where he received his Juris Doctorate degree in 1982.

Everything You Need to Know About a Career in Cyber Security

The Mitchells vs. the Machines