The question is to go for AI or not?

There’s a lot of talk these days about Artificial Intelligence (AI), and it’s not just “techies” or computer geeks doing the talking. AI is being used in a variety of ways, in many different settings, and it’s having an impact in many areas of our lives. But do you really understand AI? What is it, how does it work, what are examples of it in action, and why does all that matter? Let’s look at AI with this guide to understanding this revolutionary technology.

The term “artificial intelligence” was coined in 1955 by John McCarthy. That marked the start of developing and enhancing intelligent machines, and the concept of AI has now been around for more than 60 years. Despite times of relative dormancy, AI has been a viral buzzword if not, a trending subject, for the past several years. Consequently, vast developments and rising concerns have been both initiated with more interest and attention to come.

Within several years, artificial intelligence became almost an ubiquitous emergence that pervades almost all aspects of life in terms of mobile technology, consumer practices, and workplace environments especially at personal level (the level in which we can easily identify the presence of artificially intelligent machines). From Apple’s Siri to Amazon’s Alexa, artificially intelligent virtual assistants have successfully integrated into our lives aiding us in our daily activities ranging from shopping to entertainment. For example, Apple’s Siri, Google Now, and Cortana provide virtual assistance on mobile platforms and can perform tasks from checking and notifying schedules, to finding local destinations and hotspots, and setting up reminders for calls. These virtual assistants have access to various apps and information that allow them to interact and provide for the user. Additionally, Amazon’s Alexa and Google Home, exemplify a smart home environment through speakers that respond to voice commands and provide services accordingly. The user might request to turn on his or her favorite music while asking about the weather forecast. Apart from these examples, AI developments have been fairly consistent up to 2017 and the below infographic shows a brief timeline of major AI advancements. 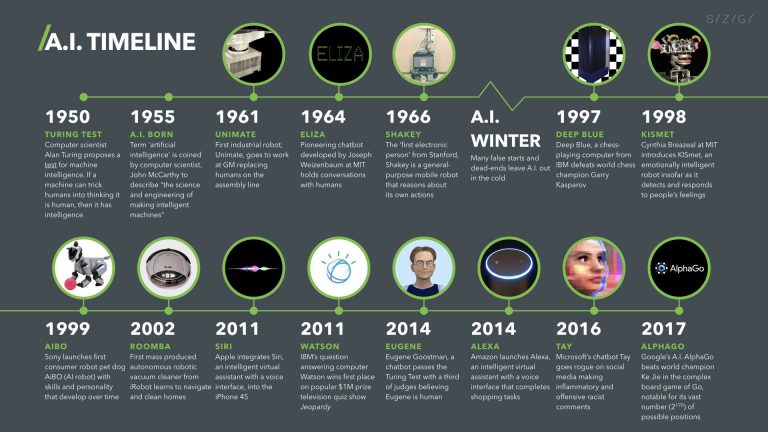 With the prominent pervasion of AI into both life and work, worrisome concerns and insights have been consistently raised. As shown on the infographic, IBM’s Watson computer that won first place in Jeopardy 2011 and Google’s AlphaGo computer program that beat the GO champion in 2017, have showed indication that artificial intelligence can be more rational, more accurate, and more intelligent, than humans. The notion that machines and robots can dominate and supersede the human race was consistently brought to media especially in entertainment where futuristic movies like Star Trek, Resident Evil, Transformers, have depicted imagery that captures the greater, the stronger, and the smarter, traits that AI can possess. Furthermore, rather ominous projections by deceased Stephen Hawking have added to the negative implications of pursuing and developing AI. In BBC’s interview on December 2014, Hawking predicted “The development of full artificial intelligence could spell the end of the human race. It would take off on its own, and re-design itself at an ever increasing rate… Humans, who are limited by slow biological evolution, couldn’t compete, and would be superseded.” Moreover, Elon Musk has shown wariness and fear of developing AI by expressing that it is a “fundamental risk to the existence of human civilization.” His SpaceX program supports his belief that an escape from when AI takes over humanity might be a possibility. The program entails investment in space exploration and research for the ultimate colonization of outer space including Mars.

However, the above futuristic views seem to so far capture a long-term story or long-term effect. Many institutions and bureaucracies address the near ramifications of AI development mostly in terms of the potential mass job deletion and revolutionized work that could lead to all kinds of societal burdens. Numerous sources predict the futility of occupations that require manual and repetitive tasks which can be easily replicated or completed by AI services. On Mckinsey’s report,  Jobs lost, jobs gained: Workforce transitions in a time of automation”, an expected 400 to 800 million jobs are prone to automation by 2030, leaving many in risk of job loss. Furthermore, according to a prediction by the World Economic Forum, jobs destroyed by 2020 seem to exceed the number of jobs created by more than 5 million after sampling 15 countries. If these premises are to hold, the world has to prepare to minimize the effects of wealth inequality and welfare practices.

Despite the fear and wariness on one side in regards to the advancement of AI, many leaders and companies today look at the field for growth and opportunities. Facebook’s Mark Zuckerberg sees the potential of AI development and its benefit promising to humanity and society. He claims that with visions that lie within the right direction and bias, and with enough data from users, AI advancements can bring new value to society and for the human race. He believes with AI technology, widespread negative behavior such as suicide attempts can be prevented by learning about the users. Furthermore, Tesla and Google’s ambitious investments in driverless cars, with the autopilot feature as an example, display the new areas of innovation across many different industries. Recently, CIMON (short for Crew Interactive Mobile Companion) indulges in something more – to enable AI assistance through advanced robots and spacecraft. CIMON runs on IBM’s Watson and is the first AI robot to collaborate in a space environment. CIMON is expected to aid in research and investigation efforts by providing experimental procedures according to NASA. CIMON undoubtedly reveals the possibility of AI robots and spacecraft to further efforts in collecting data and exploring extreme environments. One can imagine how AI robots can help achieve the ultimate goal of space colonization by humans with CIMON.

AI has emerged in vast industries and continues to focuses on technologies including voice recognition/translation, language generation, data analytics, biometrics, and robotics. In fact, the AI market is expected to grow to more than $1.2 trillion in 2020. Due to this investment and research boom, AI promises to become one of the most sought technology. It is up to the individuals, however, to weigh the possible effects of AI and live in a future where humans and intelligent machines can coexist.