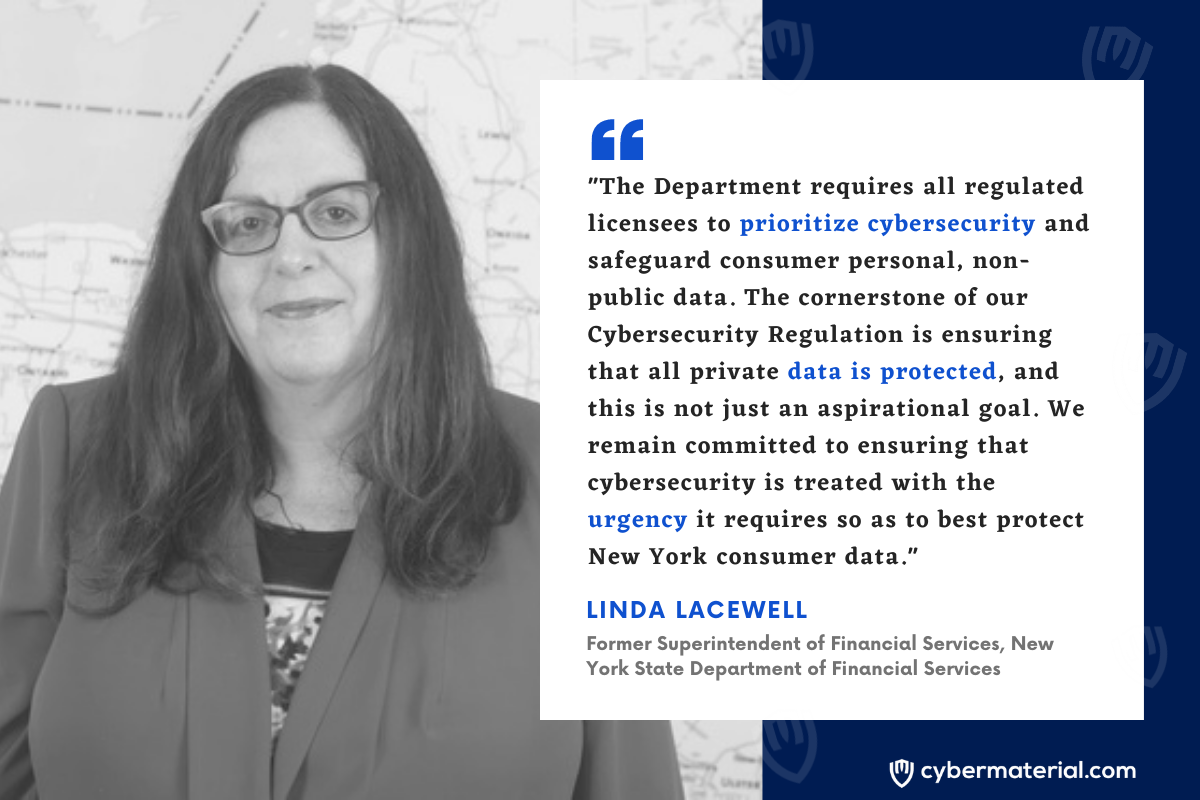 “The Department requires all regulated licensees to prioritize cybersecurity and safeguard consumer personal, non-public data. The cornerstone of our Cybersecurity Regulation is ensuring that all private data is protected, and this is not just an aspirational goal. We remain committed to ensuring that cybersecurity is treated with the urgency it requires so as to best protect New York consumer data.“ Linda Lacewell – Former Superintendent of Financial Services, New York State Department of Financial Services

Lacewell worked as an assistant U.S. attorney in the U.S. Attorney’s Office for the Eastern District of New York from 1997 to 2007, during which time she also served as a member of the U.S. Department of Justice’s Enron Task Force. She joined the New York Attorney General’s Office in 2007 as a special counsel under then-Attorney General Andrew Cuomo (D), where she remained until 2011.

Lacewell transitioned to New York Governor Andrew Cuomo’s administration as a special assistant in 2011. She later served as a special counsel and as the chief risk officer in the Cuomo administration before departing in 2016 to serve as the executive director of the Cancer Breakthroughs 2020 Foundation, an initiative of the Chan Soon-Shiong NantHealth Foundation.

Lacewell began serving as the New York superintendent of financial services in February 2019, succeeding Maria Vullo, who resigned on February 1, 2019.

In November 2017, Cuomo announced that Lacewell would serve as chief of staff in his gubernatorial administration. She succeeded Maria Comella, who resigned in order to accept a position in the private sector. Lacewell served as chief of staff from 2017 to 2019.

Lacewell earned a B.A. from the New College of the University of South Florida and a J.D. with honors from the Univerisity of Miami School of Law.

Attribution of Advanced Persistent Threats: How to Identify the Actors Behind Cyber-Espionage