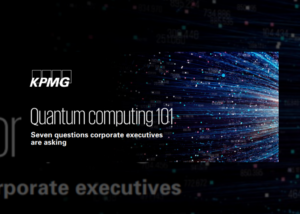 What exactly is a quantum computer?

Today’s computers encode information into bits represented by a series of zeros and ones. Although they are faster than ever, traditional computers can only perform calculations on one dataset at a time. Quantum computing is based on the principles of quantum physics in which particles, when cooled to almost -460 degrees Fahrenheit, can represent either a zero or a one simultaneously. These quantum bits, called qubits, can therefore perform virtually endless operations in parallel. Quantum computers are an entirely different form of computing and will soon solve problems that are too complex and time-consuming for today’s classical computer systems.

Can my business get a quantum computer?

Because of the complex technical requirements to house and stabilize the sensitive components of a quantum computer, it’s expected that in the near term manufacturers will maintain them and customers will access their quantum computing capabilities via the cloud. Estimates are that commercial availability of quantum computers is five to ten years away. Some observers even believe that the scope of applications is so narrow that they may never become commercially widespread. Either way, the consensus is that quantum computers will never fully displace classical computer systems, PCs, or laptops.

Are there business applications of quantum computers?

Quantum computing is best suited for advanced operations like cryptography, modeling, and database indexing. It is ill suited for mundane tasks like word processing, spreadsheets, and email. Like many early-stage technologies, however, practical use cases are still being formulated.