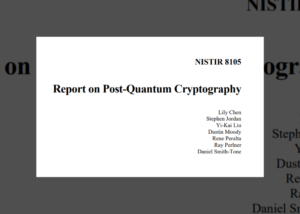 Reports on Computer Systems Technology
The Information Technology Laboratory (ITL) at the National Institute of Standards and Technology (NIST) promotes the U.S. economy and public welfare by providing technical leadership for the Nation’s measurement and standards infrastructure. ITL develops tests, test methods, reference data, proof of concept implementations, and technical analyses to advance the development and productive use of information technology. ITL’s responsibilities include the development of management, administrative, technical, and physical standards and guidelines for the cost-effective security and privacy of other than national security-related information in federal
information systems.

Abstract
In recent years, there has been a substantial amount of research on quantum computers – machines that exploit quantum mechanical phenomena to solve mathematical problems that are difficult or intractable for conventional computers. If large-scale quantum computers are ever built, they will be able to break many of the public-key cryptosystems currently in use. This would seriously compromise the confidentiality and integrity of digital communications on the Internet and elsewhere. The goal of post-quantum cryptography (also called quantum-resistant cryptography) is to develop cryptographic systems that are secure against both quantum and
classical computers, and can interoperate with existing communications protocols and networks. This Internal Report shares the National Institute of Standards and Technology (NIST)’s current understanding about the status of quantum computing and post-quantum cryptography, and outlines NIST’s initial plan to move forward in this space. The report also recognizes the challenge of moving to new cryptographic infrastructures and therefore emphasizes the need for agencies to focus on crypto agility.

BOOK: Practical IoT Hacking: The Definitive Guide to Attacking the Internet of Things

“Give yourself more security than you need today. When the unexpected happens, you’ll be glad you did.”