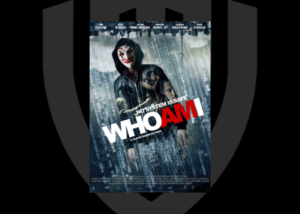 Who Am I (German: Who Am I – Kein System ist sicher; English: “Who Am I: No System Is Safe”) is a 2014 German techno-thriller film directed by Baran bo Odar. It is centered on a computer hacker group in Berlin geared towards global fame. It was screened in the Contemporary World Cinema section at the 2014 Toronto International Film Festival. The film was shot in Berlin and Rostock.[6] Because of its storyline and some elements, the film is often compared to Fight Club and Mr. Robot.

Benjamin Engel, a hacker from Berlin, sits in an interrogation room. The officer in charge tells Hanne Lindberg, Head of the Cyber Division of Europol, that Benjamin asked for her to do the interrogation. Benjamin says that he has information regarding FRI3NDS, a notorious hacking group of four members connected to the Russian cyber mafia, and MRX, an infamous hacker known on Darknet; he tells her that he could give them both to Hanne if she listens to him. Having no choice, Hanne sits down.

Benjamin tells Hanne how he is like a superhero: like many heroes, he too has no parents; he never met his father as he abandoned the family when Benjamin was born, and his mother committed suicide when he was 8. He lives alone with his ailing grandmother. He regards his “superpower” as invisibility, as he was never noticed by most people during his childhood due to him being socially awkward. He says he learned programming and hacked his first system when he was 14. Though he felt like a loser in real life, he felt a sense of belonging on the Internet. While spending most of his time on Darknet, he met his hacking hero, MRX, whose identity no one knows and who can hack into any system. Benjamin aspires to be like him.

“All the criminals need you to do is click…”