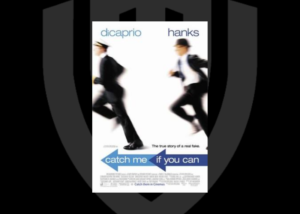 Frank Abagnale, Jr. (Leonardo DiCaprio) worked as a doctor, a lawyer, and as a co-pilot for a major airline — all before his 18th birthday. A master of deception, he was also a brilliant forger, whose skill gave him his first real claim to fame: At the age of 17, Frank Abagnale, Jr. became the most successful bank robber in the history of the U.S. FBI Agent Carl Hanratty (Tom Hanks) makes it his prime mission to capture Frank and bring him to justice, but Frank is always one step ahead of him.

In 1963, teenager Frank Abagnale lives in New Rochelle, New York with his father Frank Abagnale Sr., and French mother, Paula. When Frank Sr. encounters tax problems with the IRS, his family is forced to move from their large home to a small apartment. Meanwhile, Frank has to transfer to public school and gets into trouble when he begins posing as a substitute French teacher on his first day there.

Shortly thereafter, Frank discovers his mother is having an affair with his father’s friend Jack Barnes and runs away when his parents divorce. Needing money, he turns to confidence scams to survive and his cons grow bolder. He impersonates an airline pilot and forges Pan Am payroll checks. Soon, his forgeries are worth millions of dollars.

FBI agent Carl Hanratty begins tracking Frank. Carl finds Frank at a hotel, but Frank cons Carl into believing he is a Secret Service agent who is also after the fraudster and escapes before Carl realizes that he was fooled.

The Basics of Bitcoins and Blockchains

5G Wireless Capabilities and Challenges for an Evolving Network

87% of the phishing attacks on mobile devices use avenues other than emails like gaming, messaging, and social media apps.