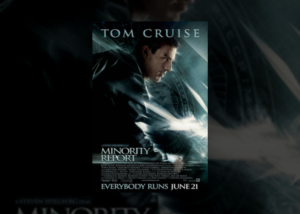 Minority Report is a 2002 American science fiction action film[5] directed by Steven Spielberg and loosely based on the 1956 short story “The Minority Report” by Philip K. Dick. It is set primarily in Washington, D.C., and Northern Virginia in the year 2054, where PreCrime, a specialized police department, apprehends criminals based on foreknowledge provided by psychics called “precogs”. The cast includes Tom Cruise as Chief of PreCrime John Anderton, Colin Farrell as Department of Justice agent Danny Witwer, Samantha Morton as the senior precog Agatha, and Max von Sydow as Anderton’s superior Lamar Burgess.

“The dynamics of warfare simply do not apply in cyberspace…”

Artificial Intelligence: The end of the beginning