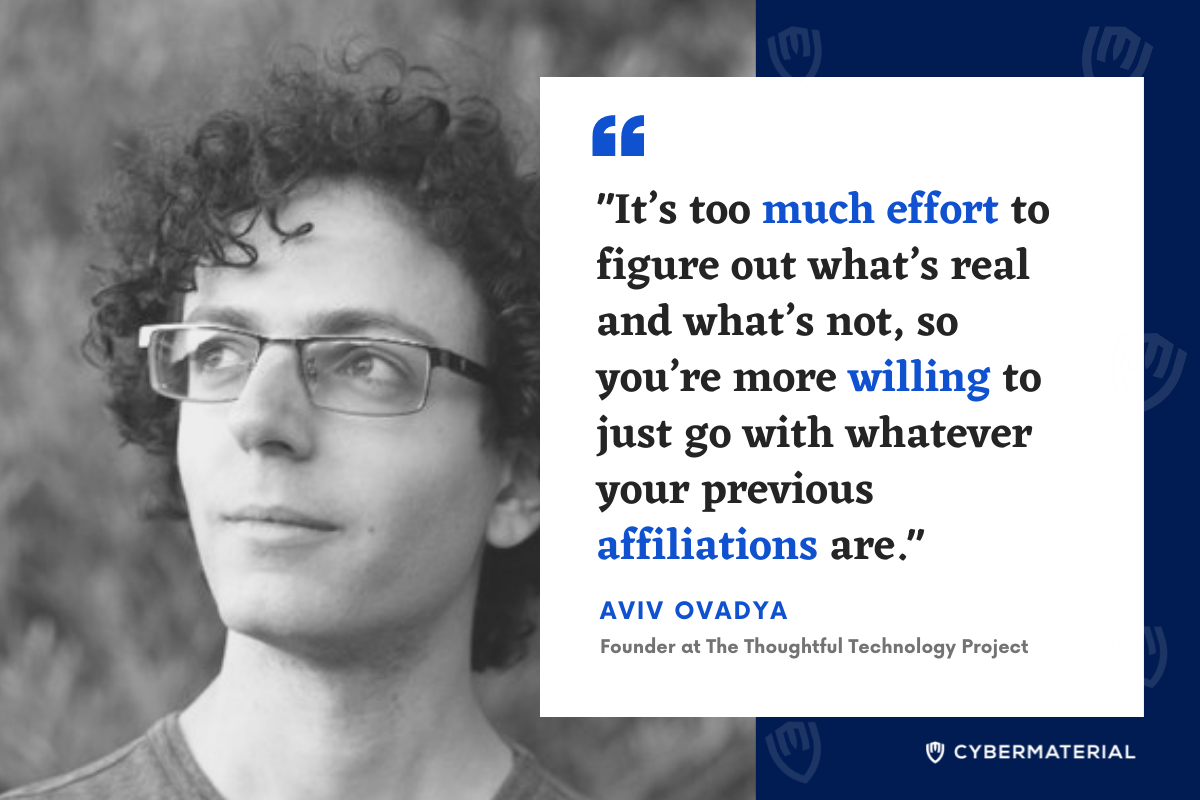 “It’s too much effort to figure out what’s real and what’s not, so you’re more willing to just go with whatever your previous affiliations are.” – Aviv Ovadya – Founder at The Thoughtful Technology Project

Aviv Ovadya is a technologist working to ensure that our mediums of communication can facilitate a ‘good society’—that they not only support our everyday lives, but also promote the collective trust and intelligence necessary for taking on existential global challenges.

He is the founder of the Thoughtful Technology Project, a non-resident fellow at the Alliance for Securing Democracy, and a responsible technology consultant. His work touches on a variety of problems, tools, and domains, including misinformation, synthetic media (e.g. deepfakes, language models), content moderation, recommendation engines, contextualization, platform design, governance, media literacy, intelligence alignment, and operationalizing tech ethics.

Aviv received his S.B. and M.Eng. degrees in computer science at MIT, and did engineering and product work in Silicon Valley, with short stints in Vietnam and Brazil. His information ecosystem research brought him to Columbia University as a Knight News Innovation Fellow, and the Center for Social Media Responsibility at the University of Michigan as the founding Chief Technologist.

He consults for organizations as varied as the Partnership on AI, Snopes, and Meedan, and has presented his work internationally, including to technology platforms, the Council on Foreign Relations, and keynoting for Denmark’s Ministry of Foreign Affairs.

Aviv’s writing has been published at the Washington Post, HBR, MIT Technology Review, and Bloomberg and his work has been covered regularly by publishers including the BBC, NPR, Yomiuri Shimbun, the Economist, and the New York Times.
He can be found online at aviv.me and tweets as @metaviv.

“We are all exposed to the same risk…”

“The new cyber warfare is going after…”

“At the organizational level, deepfakes…”