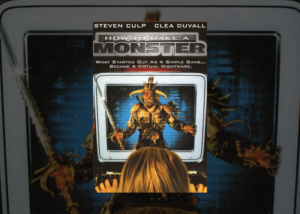 How to Make a Monster is a 2001 film starring Steven Culp and Clea DuVall. It is the third release in the Creature Features series of film remakes produced by Stan Winston. Julie Strain made a cameo appearance in the film as herself.

Two computer game programmers are ordered to come up with the scariest monster ever. However, a lightning strike at the crucial moment brings their bloodthirsty creation to life, putting all of their lives in danger.