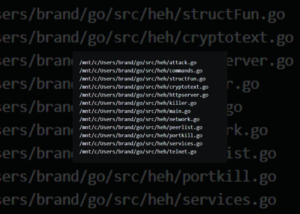 Recently, 360Netlab threat detection system captured a batch of unknown samples. The CPU architectures supported by this batch of samples are broad, including x86(32/64), ARM(32/64), MIPS(MIPS32/MIPS-III) and PPC, it is spreading through brute force of the Telnet service on ports 23/2323, which means the bot does not really care of what the end devices are, as long as it can enter the device, it will try its luck to infect the target. The botnet is written in Go language, and uses proprietary P2P protocol, we named it HEH Botnet .

According to 360Netlab the operating mechanism of this botnet is not yet mature as some important function such as attack module have not yet been implemented. Also the P2P implementation still has flaws, the Bot does maintain a Peer List internally, and there is ongoing Ping<–>Pong communication between peers, but the entire Botnet still is considered centralized, as currently the bot node cannot send control command. In addition, the mechanism of carrying the sample itself through the local HTTP Server is not very pretty. With that being said, the new and developing P2P structure, the multiple CPU architecture support, the embedded self-destruction feature, all make this botnet potentially dangerous.

Black Friday and Cyber Monday, crooks are already at work