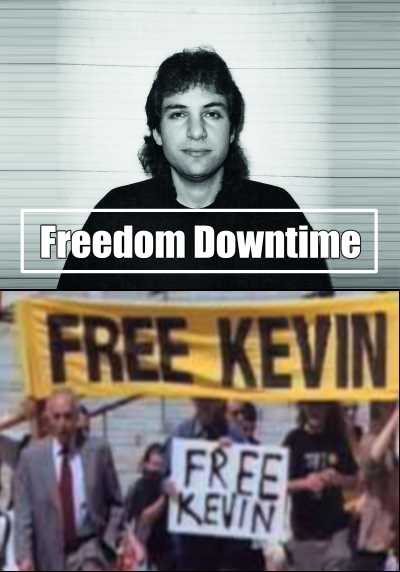 Freedom Downtime is a 2001 documentary film sympathetic to the convicted computer hacker Kevin Mitnick, directed by Emmanuel Goldstein and produced by 2600 Films.  The documentary centers on the fate of Mitnick, who is claimed to have been misrepresented in the feature film Takedown (2000) produced by Miramax and adapted from the book by the same name by Tsutomu Shimomura and John Markoff, which is based on disputed events. The film also documents a number of computer enthusiasts who drive across the United States searching for Miramax representatives and demonstrating their discontent with certain aspects of the bootleg script of Takedown they had acquired. One of their major points of criticism was that the script ended with Mitnick being convicted to serve a long-term prison sentence, while in reality, at the time the film’s production, Mitnick had not yet even had a trial but nonetheless was incarcerated for five years without bail in a high-security facility. Freedom Downtime also touches on what happened to other hackers after being sentenced. The development of the Free Kevin movement is also covered.

Documentary: The Race: How to Build a Quantum Computer (2019)

Cybersecurity and Cyberwar: What Everyone Needs to Know

Humor based in my pain