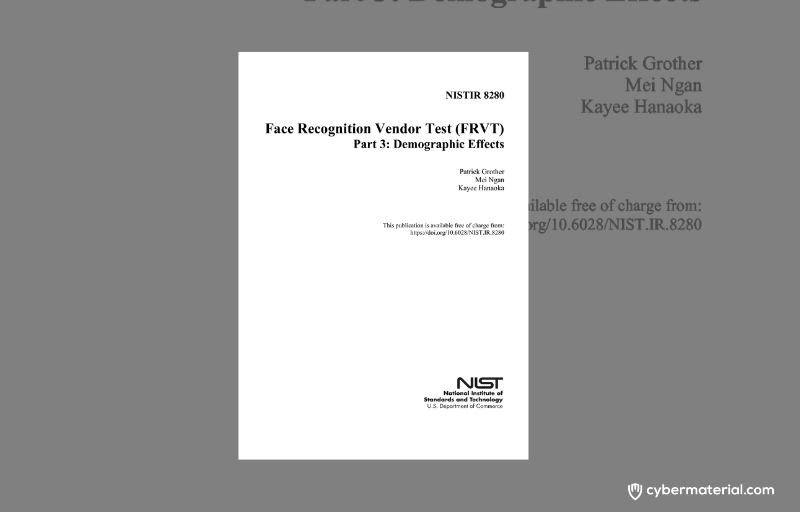 This is the third in a series of reports on ongoing face recognition vendor tests (FRVT) executed by the National Institute of Standards and Technology (NIST). The first two reports cover, respectively, the performance of one-to-one face recognition algorithms used for verification of asserted identities, and performance of one-to-many face recognition algorithms used for identification of individuals in photo data bases. This document extends those evaluations to document accuracy variations across demographic groups.

The recent expansion in the availability, capability, and use of face recognition has been accompanied by assertions that demographic dependencies could lead to accuracy variations and potential bias. A report from Georgetown University work noted that prior studies, articulated sources of bias, described the potential impacts particularly in a policing context, and discussed policy and regulatory implications. Additionally, this work is motivated by studies of demographic effects in more recent face recognition and gender estimation algorithms.

The NIST Information Technology Laboratory (ITL) quantified the accuracy of face recognition algorithms for demographic groups defined by sex, age, and race or country of birth.

We used both one-to-one verification algorithms and one-to-many identification search algorithms. These were submitted to the FRVT by corporate research and development laboratories and a few universities. As prototypes, these algorithms were not necessarily available as mature integrable products. Their performance is detailed in FRVT reports.

All four datasets were collected for authorized travel, immigration or law enforcement processes. The first three sets have good compliance with image capture standards. The last set does not, given constraints on capture duration and environment. Together these datasets allowed us to process a total of 18.27 million images of 8.49 million people through 189 mostly commercial algorithms from 99 developers.

How Do I Know If An MSP Is Right For My Organization?

Cloud Security Podcast. SIEM Modernization? Is That a Thing?