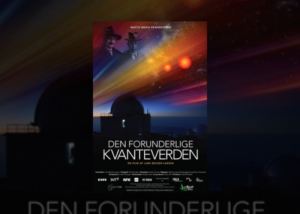 Synopsis: Physicists all over the world are currently working on the revolutionary quantum computers of the future, whose dizzying power will turn society as we know it upside down. The quantum computer will be a threat to any existing form of internet security but it will also give us quantum encryption, which will be impervious to any surveillance. Quantum computers will be able to mimic nature down to the tiniest detail, enabling global solutions to energy problems. Quantum computers apply Niels Bohr’s peculiar quantum physics, which Albert Einstein refused to believe could be so crazy, while Bohr insisted that on the contrary, you could not understand quantum physics without getting dizzy. Lars Becker-Larsen’s film takes us back to the legendary tram ride during Einstein’s visit to Copenhagen on which Einstein and Bohr immediately got into a fierce argument about the mysterious quantum world.