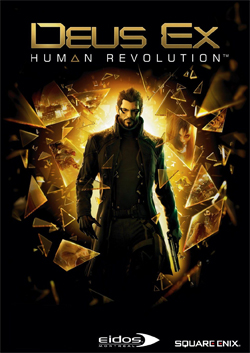 Deus Ex: Human Revolution is an action role-playing video game developed by Eidos Montréal and published worldwide by Square Enix in August 2011 for Microsoft Windows, PlayStation 3, and Xbox 360: a version for OS X released the following year. It is the third game in the Deus Ex series, and a prequel to the original Deus Ex. The gameplay—combining first-person shooter, stealth, and role-playing elements—features exploration and combat in environments connected to multiple city-based hubs, in addition to quests that grant experience and allow customization of the main character’s abilities with items called Praxis Kits. Conversations between characters feature a variety of responses, with options in conversations and at crucial story points affecting how some events play out.

Set in the year 2027, Human Revolution focuses on ex-SWAT officer Adam Jensen, who is employed as a security officer for Sarif Industries, a company on the leading edge of advanced and controversial artificial organs dubbed “augmentations”. An attack on Sarif Industries that apparently kills researcher and Adam’s ex-girlfriend Megan Reed also leaves Adam critically injured. To save him, company CEO David Sarif subjects him to an extensive augmentation procedure: six months later, now recovered and possessing advanced augmentations, Adam sets out to pursue his attackers and the shadowy organization behind them. The story explores themes of transhumanism, the growing power of megacorporations, and their impact on social class. It also uses the series’ recurring cyberpunk setting and conspiracy theory motif.

Development of Human Revolution began in 2007 with a small team within the fledgling Eidos Montréal studio, after multiple aborted attempts to create a sequel at original developer Ion Storm following the 2003 release of Deus Ex: Invisible War. The two key influences were the myth of Icarus, a thematic element carried over from Deus Ex; and the artwork and ideas of the Renaissance, which influenced the story, graphics, and music, while combining with the series’ typical cyberpunk elements. The open-ended nature of the gameplay was tricky for the team to achieve; as a result, the boss battles were outsourced to another developer due to time constraints. The music, composed by Michael McCann, focused on ambiance and three-layered compositions over character themes and overt melodies.

Note: While the general plot of Human Revolution follows a distinct path, many elements are subject to the player’s decisions. The game also offers several subplots which the player may or may not encounter, depending on their actions within the game. This synopsis concentrates on the main, unavoidable plot thread of the game.

On the eve of unveiling a new type of augmentation that will end dependence on Neuropozyne, Sarif Industries is attacked by a group of heavily augmented terrorists known as the Tyrants, who slaughter the staff. Megan Reed and a number of other scientists are presumed dead in the attack. Adam Jensen, head-of-security at Sarif Industries, is grievously wounded in the attack. David Sarif saves Jensen’s life by giving him advanced prototype augmentations that transform him into a half-machine super-soldier. Curiously, Jensen’s body does not attempt to reject the implants, and therefore he does not need to take Neuropozyne.

Months later, Adam is summoned to deal with another terrorist attack on Sarif Industries, this time by a group of anti-augmentation radicals. Curiously, one of the terrorists is augmented, and Jensen finds him trying to steal weapon blueprints from a computer. The augmented terrorist shoots himself in the head before Jensen can capture him. Frank Pritchard later discovers that the augmented terrorist was being controlled remotely by some unknown hacker. Pritchard tracks the hacking signal to an abandoned factory in Highland Park. Adam discovers the Tyrants guarding a FEMA detention camp, but they are moving out after the failure of the Sarif raid. Adam confronts and defeats one of the mercenaries, Barrett, who tells him to go to the newly built Hengsha megacity in China before killing himself with a grenade.

Together with pilot Faridah Malik, Adam travels to Hengsha and tracks down the hacker, Arie van Bruggen, who is being both hunted by private security company Belltower Associates and hidden by local triad leader Tong Si Hung. Van Bruggen directs Adam to find evidence inside Tai Yong Medical, the world’s largest augmentation technology manufacturer and Sarif’s main rival. Infiltrating Tai Yong, Adam finds footage of a call between Namir and Zhao Yun Ru, which confirms that Megan and the other missing scientists are alive and that Eliza Cassan is somehow involved. Confronting Zhao in her penthouse apartment, he learns that she is allied to a powerful organization that controls global interests before she triggers security and forces him to leave. Traveling to the Picus corporate building in Montreal, Jensen tracks down Eliza, revealed to be an artificial intelligence construct designed to influence the media. Despite her programming, she has begun to question her role and offers to help Adam. After he defeats Tyrant member Fedorova, Eliza gives him footage directing him to Doctor Isaias Sandoval, aide to William Taggart.

Back in Detroit, Sarif admits to Adam that the Illuminati are behind the attacks. Adam infiltrates a Humanity Front rally and discovers Sandoval’s location. Sandoval admits his involvement in the kidnapping and gives Adam the lead to find the researchers. Back in Sarif HQ, Adam meets Hugh Darrow, who is currently working to stave off global warming with the newly constructed Panchaea Facility in the Arctic. Adam, along with other augmented people, also start experiencing painful glitches, with authorities urging them to have a biochip replacement. Pritchard locates the tracking beacon of one of the scientists, taking Adam back to Hengsha, where he and Malik are ambushed by Belltower. The beacon leads Adam to Tong Si Hung, who has just been implanted with the now-deceased scientist’s arm. Under Tong’s direction, Adam manages to stow away in a stasis pod in the wake of a staged explosion, waking up a few days later in a secret Singapore base. He finds the kidnapped scientists, and learns that the biochip malfunctions were staged to distribute the result of their research: a new biochip to control augmented humans. Adam and the scientists stage a distraction, allowing him to infiltrate the facility’s secret bunker. Here he faces Namir one last time, then finds Megan. Confronted, Megan tells him that she was kidnapped for her research into augmentation rejection. She confesses that her cure for augmentation rejection was based on Jensen’s DNA.

Moments later, Darrow appears live on television and broadcasts a modified signal that throws any augmented person with the new biochip into a fear-driven, murderous frenzy. Jensen evacuates the scientists, and commandeers an orbital flight module to reach Panchaea. He confronts Darrow, who reveals that he wants humanity to abandon the augmentation technology he invented, because he believes it will destroy human identity. Adam sets out to disable Panchaea’s Hyron Project supercomputer and end the broadcast; on the way, he encounters Taggart and Sarif, who each urge him to side with them and further their own agendas. At the heart of Panchaea, Jensen first confronts Zhao Yun Ru when she tries to hijack the signal for her own use; then Eliza, who offers Jensen four choices. Jensen can either broadcast the full truth and distance humanity from augmentations; rig the broadcast so it throws suspicion on the Humanity Front and allows further development of augmentation technology; send out a report blaming the incident on contaminated Neuropozyne so Taggart’s group and by extension the Illuminati find new support; or destroy Panchea, leaving no-one to “spin the story”. Depending on the choice and whether Jensen has taken a pacifist or violent approach through the game, his final narration varies.

In a post-credits scene, Megan meets with Bob Page, the main antagonist of Deus Ex, to discuss her employment in “the nanite virus chimera” and “D project”: prior to this, Page instructs his cohort Morgan Everett to search the Hyron Project for salvageable technology for the ‘Morpheus Initiative’: these are the precursors to the creation of the Denton clones, the manufactured nanotechnological “Gray Death” virus and the “Helios” artificial intelligence, key parts of the plot of Deus Ex.

“It takes 20 years to build a reputation and few minutes of cyber-incident to ruin it.”