DEEPFAKE,CHEAPFAKE: THE INTERNET’S NEXT EARTHQUAKE? 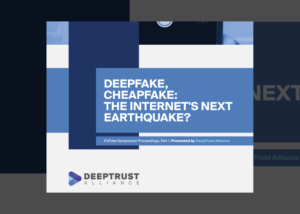 Deepfakes burst into the collective imagination in 2018, portending serious consequences for our society. Until recently, media consumers could presumptively trust the authenticity of video and audio content – what they viewed was generally the same as what was originally captured by recording equipment. Only Hollywood movie studios (and sovereign governments) had access to the processing power and computer-generated imagery (CGI) tools for advanced media creation, and the resulting content was labeled and consumed inside movie theaters and television programs. But those techniques have escaped the entertainment industry and are now being deployed as powerful new weapons in the long running battle of disinformation. Deepfakes threaten to create an alternate universe where what you see – or hear – may only be a spurious facsimile of reality. The implications of maliciously manipulated video, audio and text are staggering for the global community. How will decision makers trust inputs and data to have confidence in their conclusions? How will industry, government, courts, media and other institutions cope in a world where the authenticity of their communication is always suspect?

Front end vs Back end