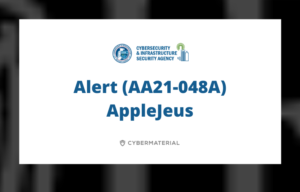 This joint advisory is the result of analytic efforts among the Federal Bureau of Investigation (FBI), the Cybersecurity and Infrastructure Security Agency (CISA), and the Department of Treasury (Treasury) to highlight the cyber threat to cryptocurrency posed by North Korea, formally known as the Democratic People’s Republic of Korea (DPRK), and provide mitigation recommendations. Working with U.S. government partners, FBI, CISA, and Treasury assess that Lazarus Group—which these agencies attribute to North Korean state-sponsored advanced persistent threat (APT) actors—is targeting individuals and companies, including cryptocurrency exchanges and financial service companies, through the dissemination of cryptocurrency trading applications that have been modified to include malware that facilitates theft of cryptocurrency.

The U.S. Government has identified malware and indicators of compromise (IOCs) used by the North Korean government to facilitate cryptocurrency thefts; the cybersecurity community refers to this activity as “AppleJeus.” This report catalogues AppleJeus malware in detail. North Korea has used AppleJeus malware posing as cryptocurrency trading platforms since at least 2018. In most instances, the malicious application—seen on both Windows and Mac operating systems—appears to be from a legitimate cryptocurrency trading company, thus fooling individuals into downloading it as a third-party application from a website that seems legitimate. In addition to infecting victims through legitimate-looking websites, HIDDEN COBRA actors also use phishing, social networking, and social engineering techniques to lure users into downloading the malware.

Why did I choose this life?